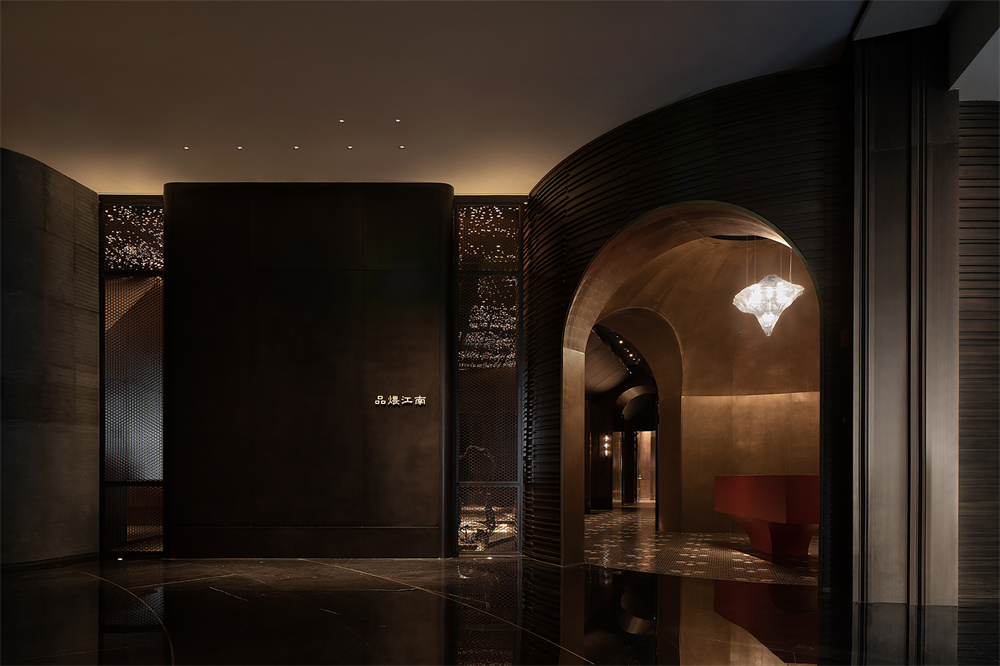 Tasting closely links with simmering in terms of delicacy.

Simmering means making delicacies with small firepower in a slow way to stimulate beautiful experience from food, and tasting means enjoying delicacies from good simmering practice. They mutually have a relationship of cause and effect. Taste Jiangnan not only is about the meaning of words, but also contains the life style, life pace and food culture in Jiangnan. 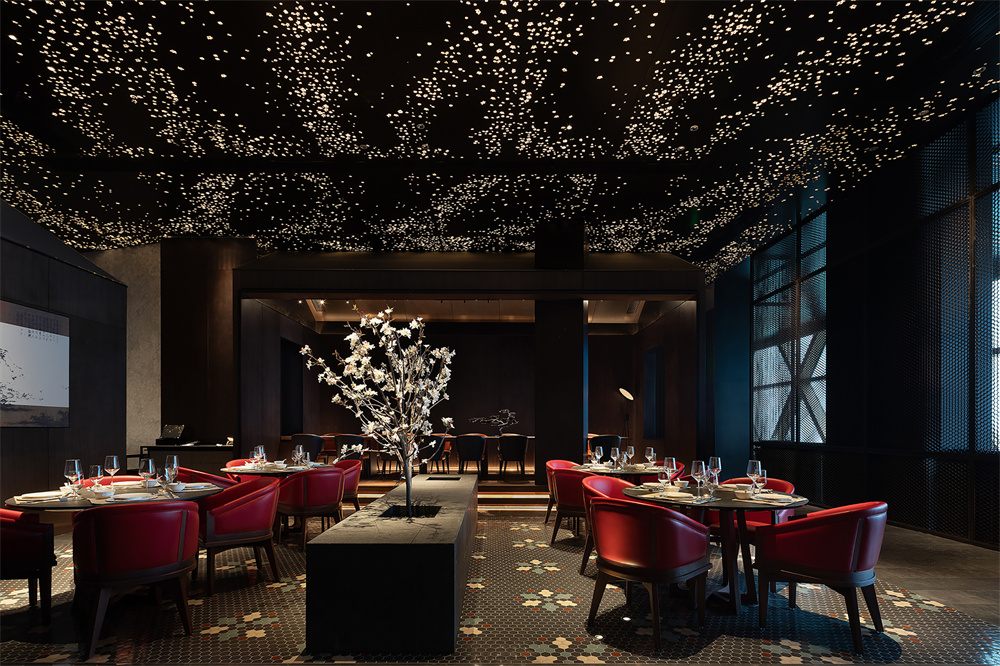 The Chinese restaurant “Taste Jiangnan” was named for this reason.Taste Jiangnan is located on the 50th floor of Nanjing Golden Eagle Hotel, so that guests can overlook Nanjing at this quiet but commanding environment here. Based on the water town scenery in Jiangnan, Designer Liu Daohua realized a cross-dimensional dialogue between traditional Jiangnan and modern aesthetics by transforming traditional architecture, rural settlements and Huaiyang cuisine into his design language, to pay tribute to the graceful water towns as described in the poem sentence “The ladies selling wine in restaurants are very beautiful in Jiangnan. Their arms are as white as snow when they lift their sleeves”. 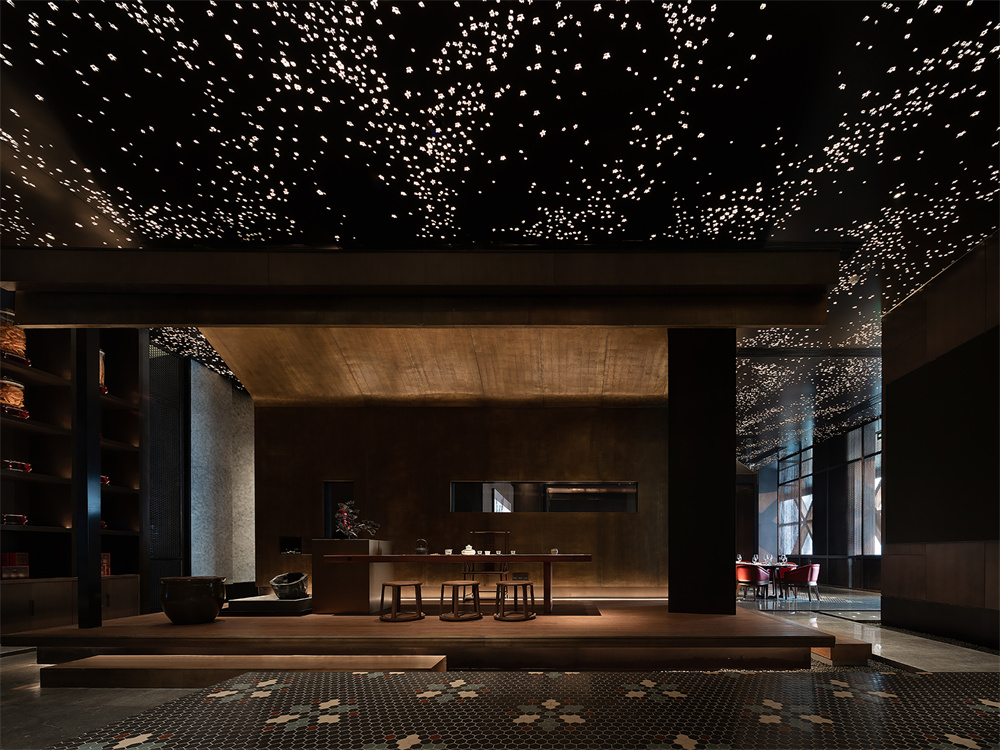 Liu Daohua is famous for his design of restaurants, cafes and the like. He is good at transforming natural life and cultural characteristics into elements in the space, combining practicability and artistic expression, and using architectural techniques to reshape the originally single space and explore the purest diet and life. 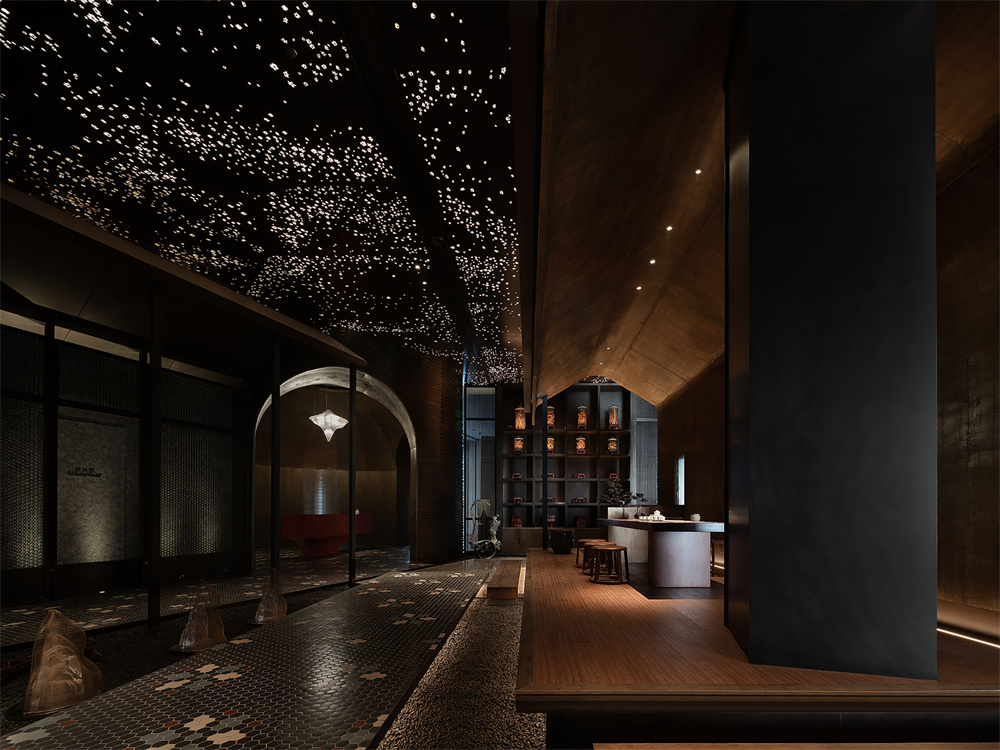 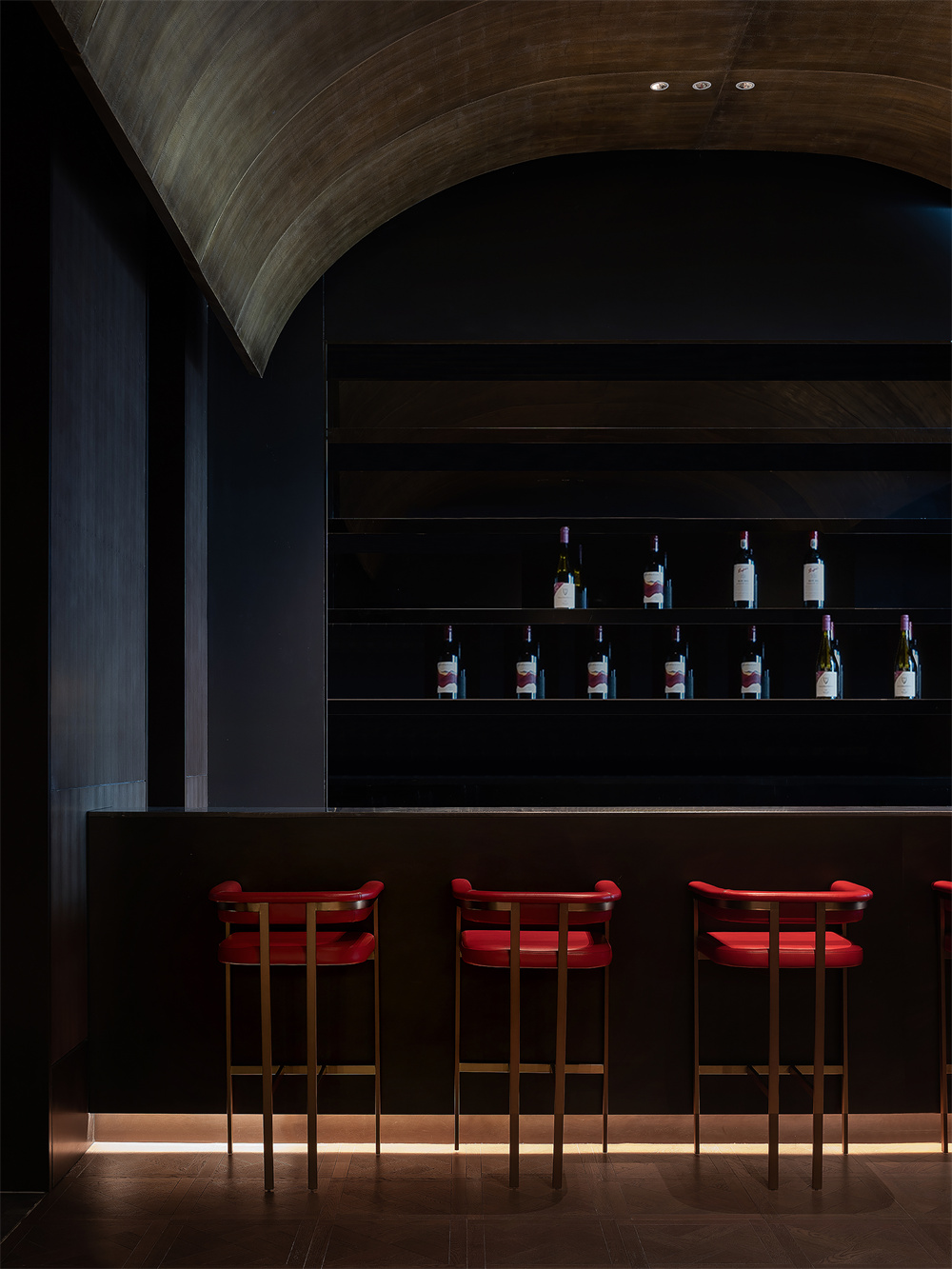 Just entering the restaurant, guests will be attracted to a teahouse area. As a core area and first impression at the entrance, such teahouse area was designed with practices different from conventional ones and integrates the concept of a traditional garden. After passing through a “forest path”, a winding one as a spatial movement line, guests come to a place for appreciation, communication and leisure which is enclosed under the eaves of modern deconstruction. Several seating scenarios were set up to satisfy the diverse needs of different customer groups. Furniture was designed in a simple but advanced manner, and their red brown, burlywood and black overlap into different color levels to show elegance. In Taste Jiangnan, its indoor decoration deems dark brown as the fundamental key on the whole, and is embellished with deep or shallow brass with the texture of log, which forms a bright color line jumping out of profound colors. With a sense of Jiangnan architecture, the space creates a delicate sense of layers with these scattered colors and shadows, thus providing guests with an elegant and quality dining experience. 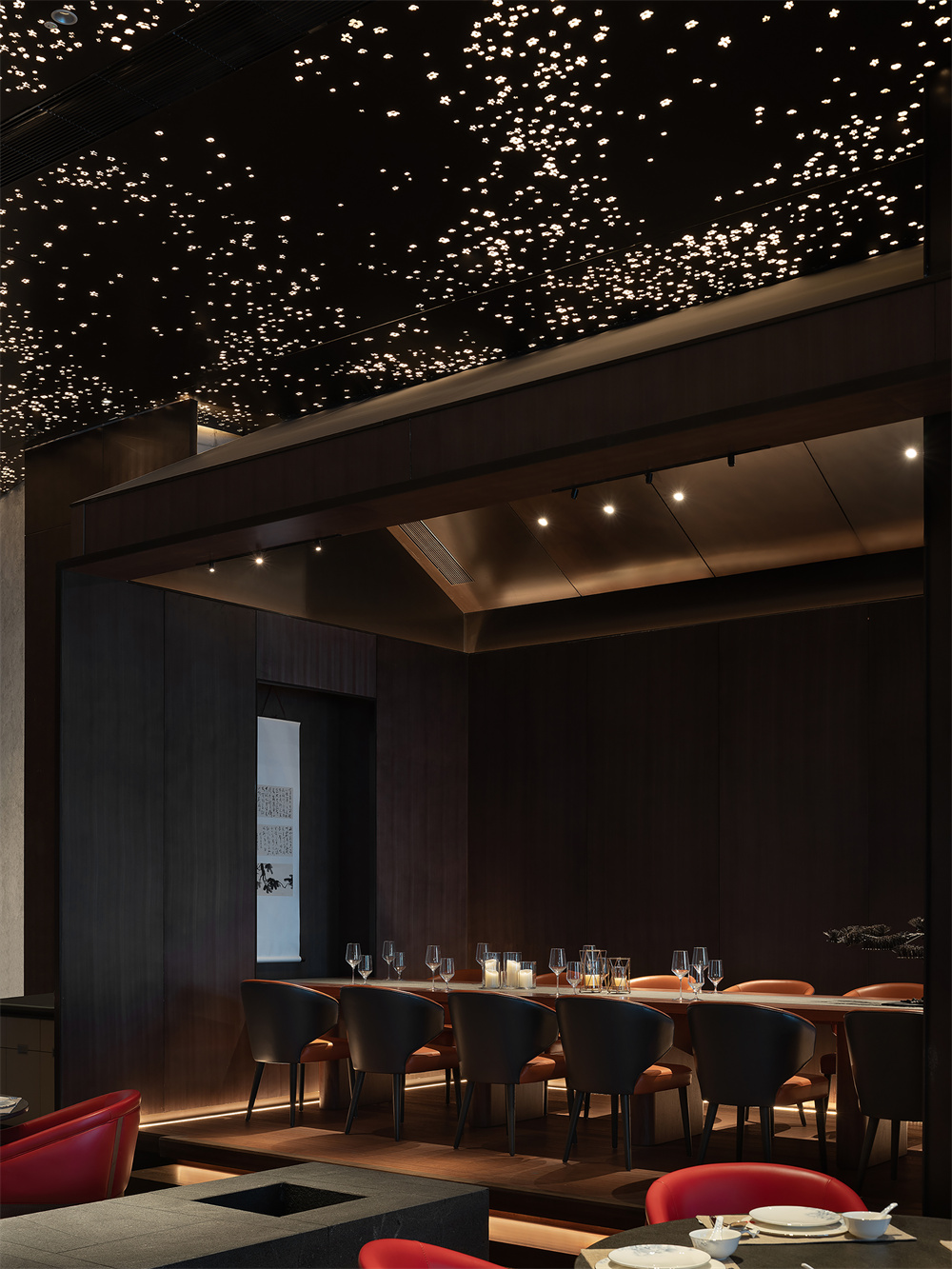 As the highest restaurant in Nanjing, Taste Jiangnan is connected with the outside with the large-scale French windows, so that guests can overlook the scenery of Nanjing with an excellent vision, including the graceful Qinhuai River and Zhongshan Mount. The designer specially set up private boxes with the architectural style of Jiangnan water towns, which are independent each other but connected mutually, and quiet in sufficient ritual feeling. 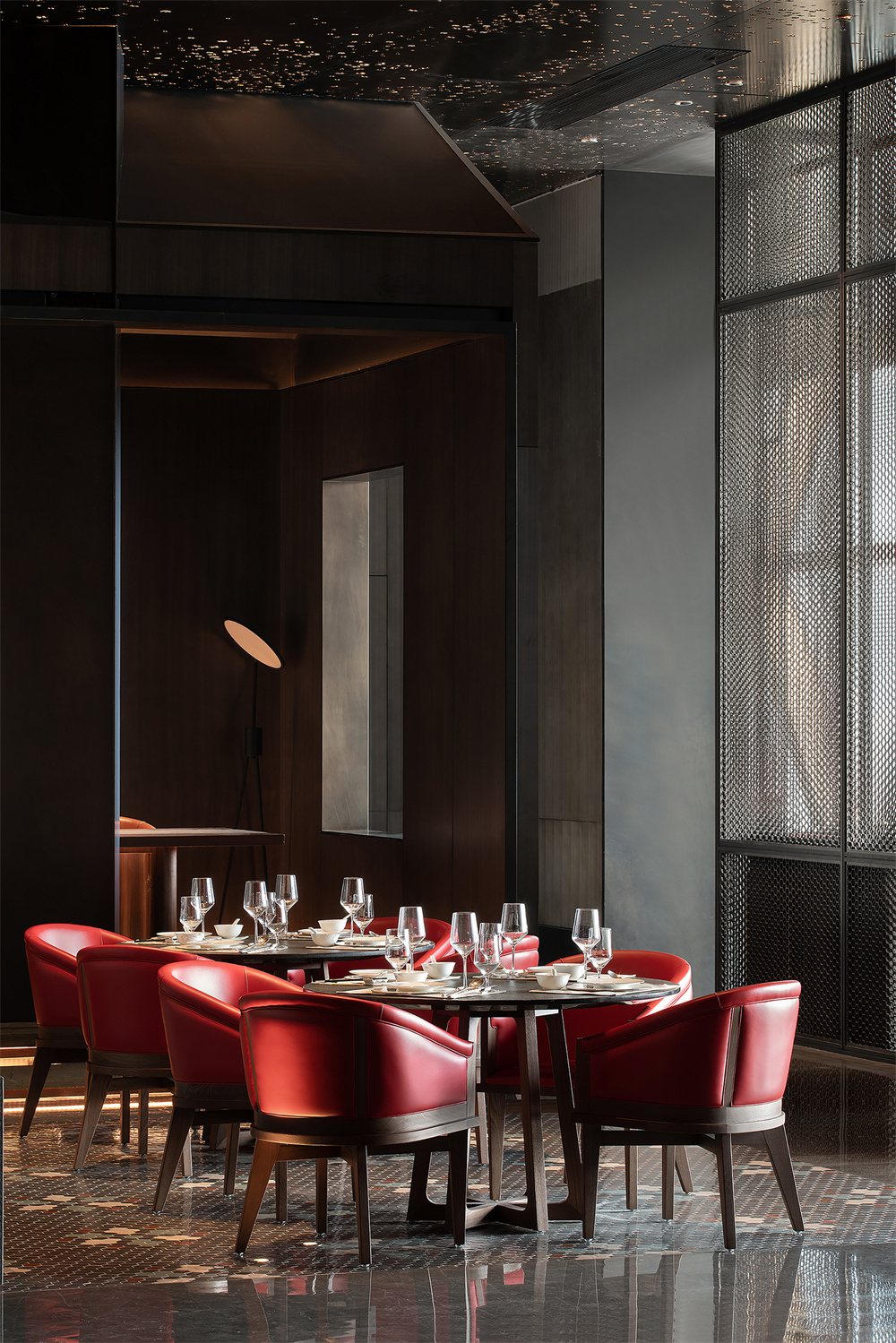 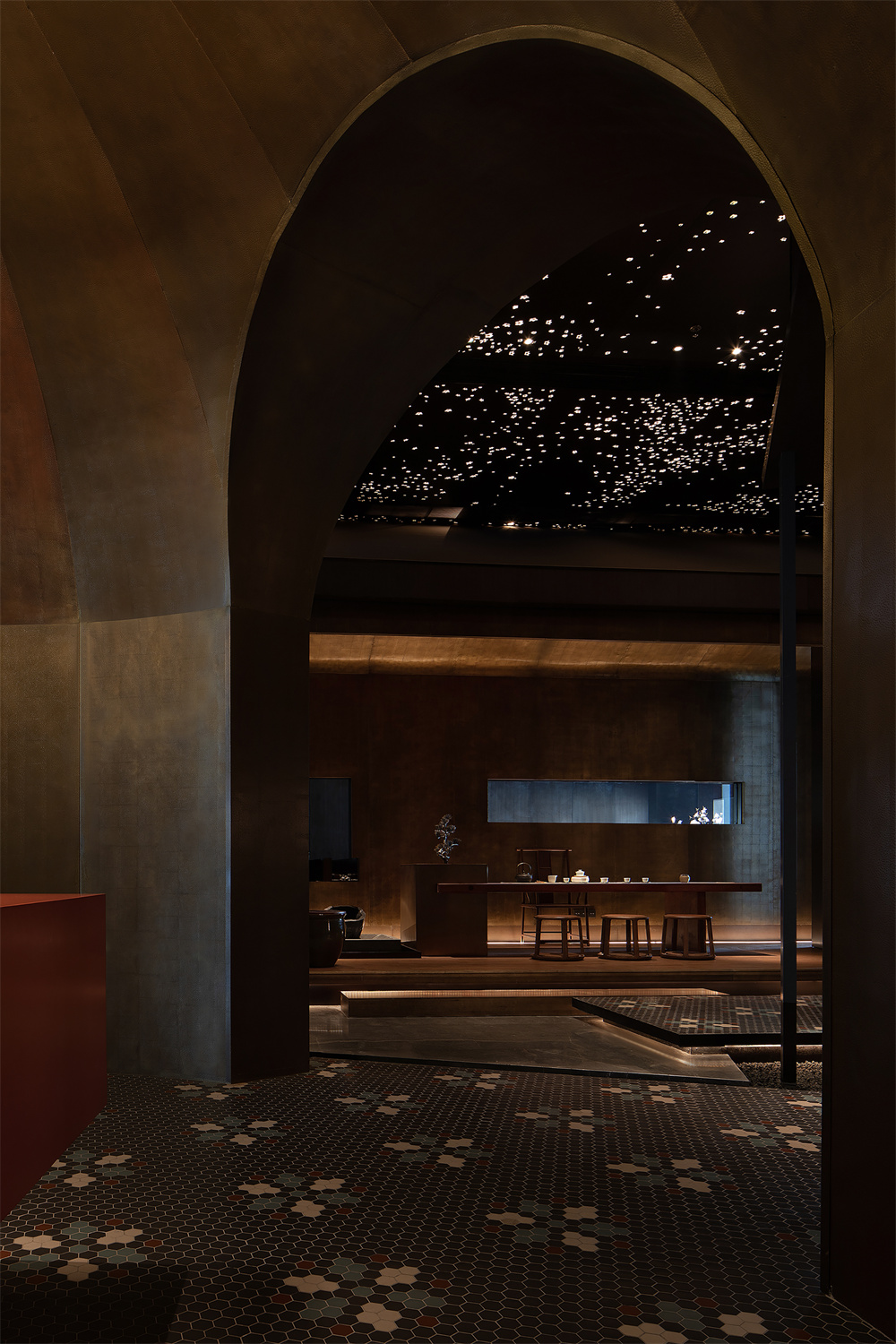 Plum blossom, the top of the 24 major flowers, is the city flower of Nanjing. It not only has the elegant appearance of flowers, but also auspiciously implies “five blessings in plum blossoms” with its five petals. With “plum blossom” as a theme concept element, the designer deduced it in different details of the space and formed a theme design for the whole space, as if fragrant plum blossom drifts freely under the sunshine. These staggered petals form both the mark of life and majestic beauty. 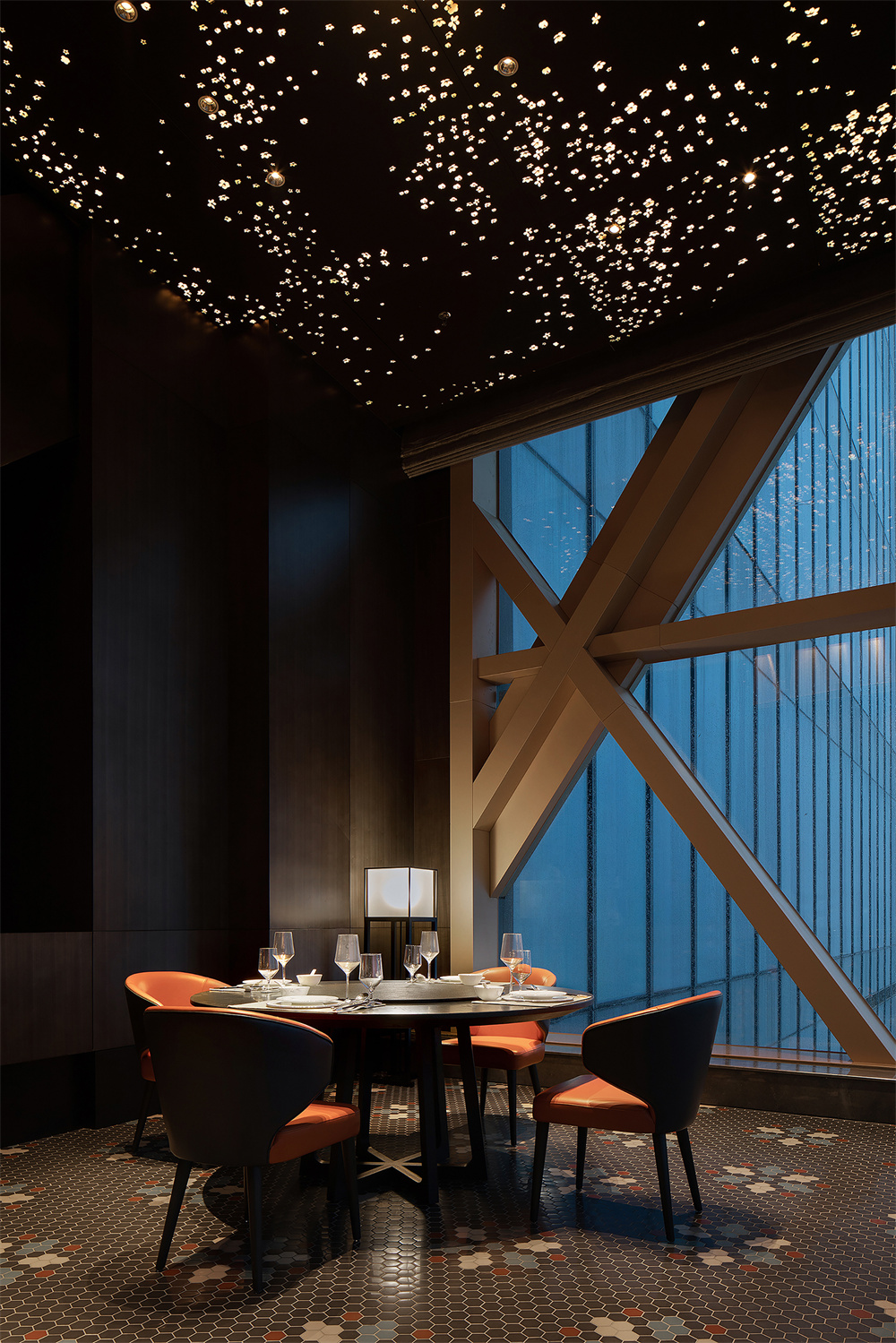 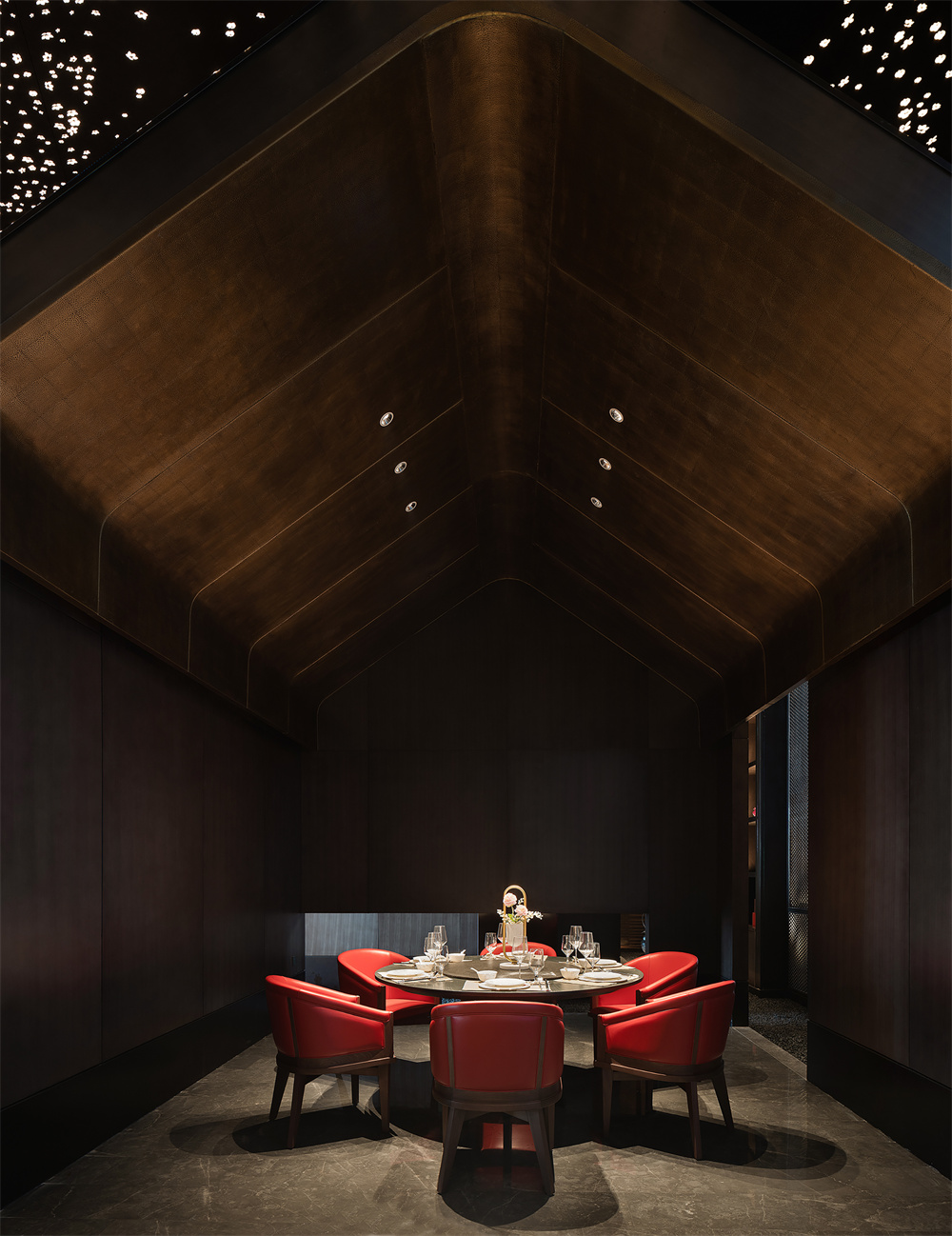 There is a saying in the Wei Chi Hexagram of the I Ching (Yi · Weiji), “Each shall live in a square place, so that all have their steady residences.”, which means that square can domicile people in a peaceful and pleasing manner. With the perspective of inheritance, acceptance and recovery, the modern space was highlighted with some local characteristics in Taste Jiangnan. Sometimes, space design must surpass the requirements of pure functions and combine with traditional architectural culture, so as to realize the spiritual meaning of space and trigger the spiritual resonance of people. 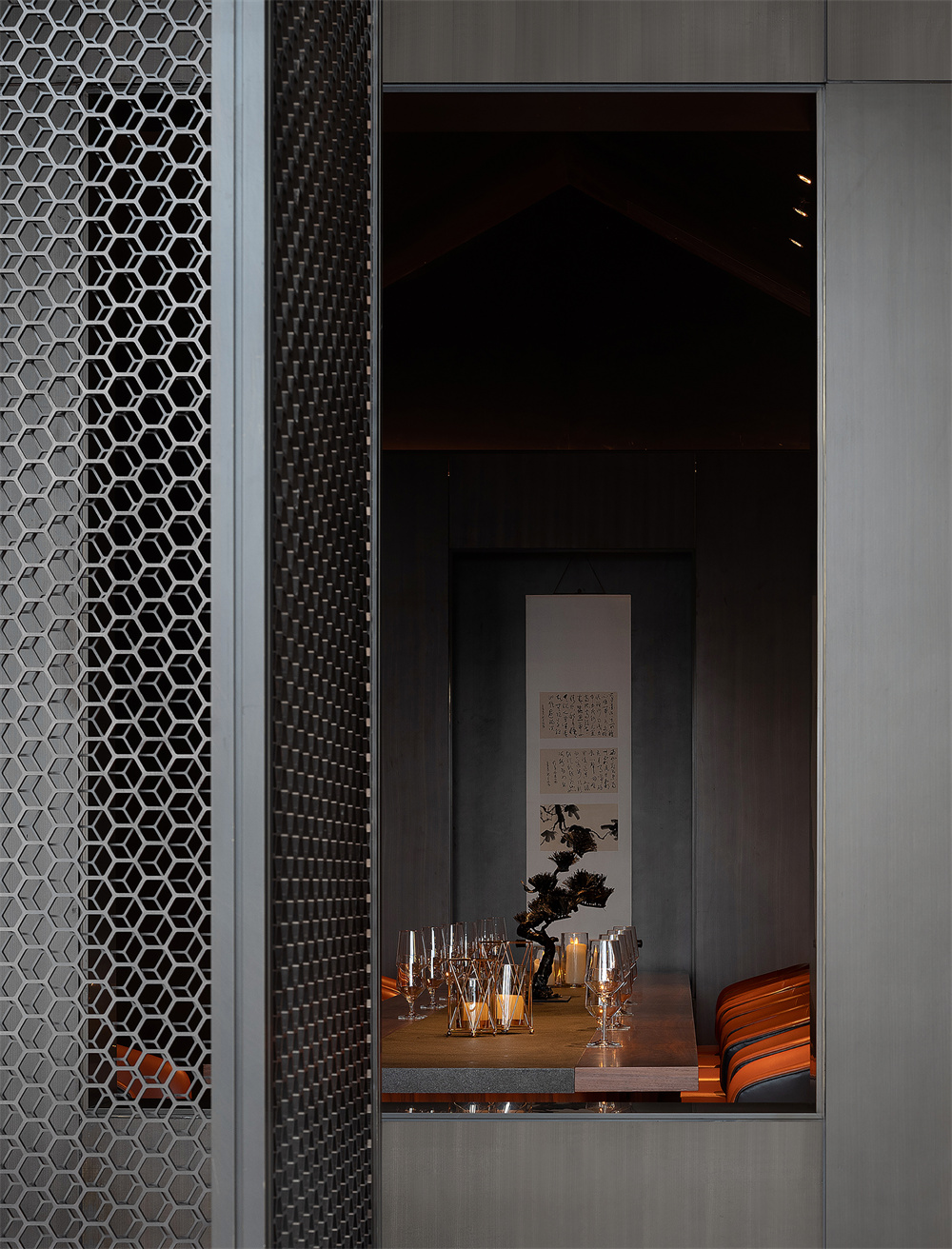 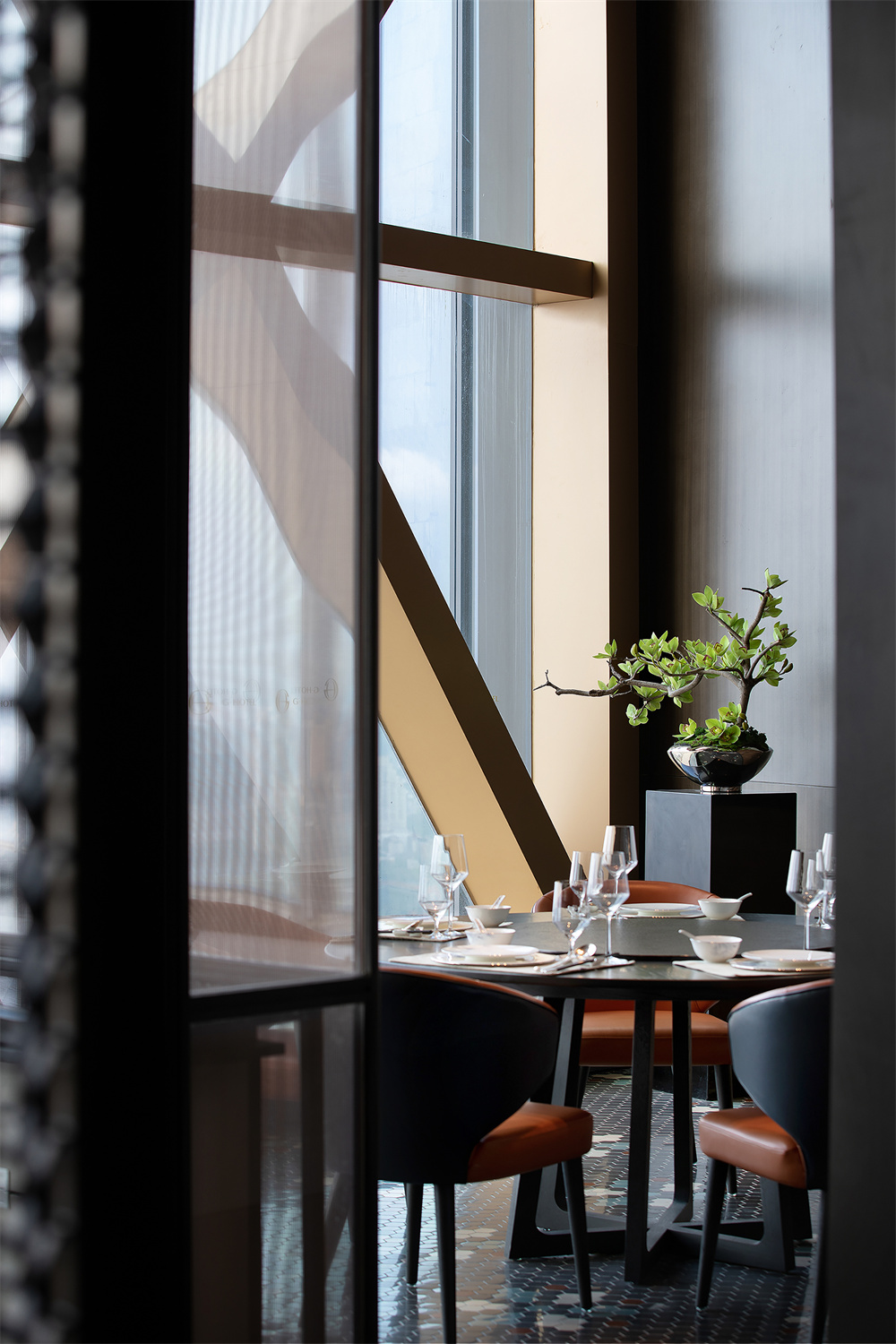 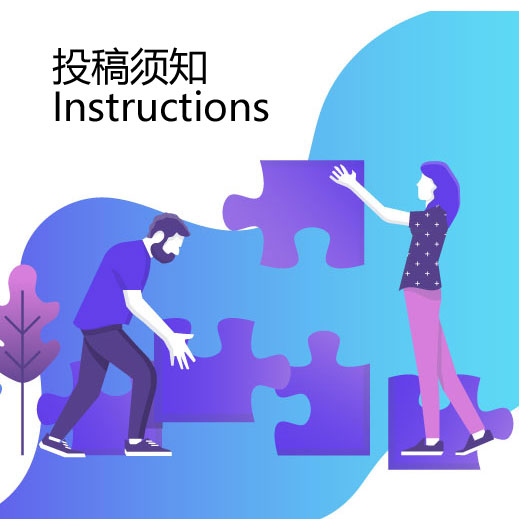