Site Selection： The Dual Needs of Space and Narration

The project begins with site selection. As with most projects of the design team, the site is not designated, but the result of careful selection during the survey. The old village of Hanhonggou is of a long and narrow shuttle-shaped landform. The site is located in the middle and rear of the old village, with ditches and open spaces in front of it. Because it is just on the middle line of the geographical long axis, the site naturally becomes the focus of the line of sight, and is also the most ideal location for viewing the central landscape of the village. The logic of choosing to set up the public buildings for leisure here is similar to the establishment of pavilions in traditional Chinese gardens： It is not only the foothold for viewing the landscape, but also the main body of the landscape to be viewed. 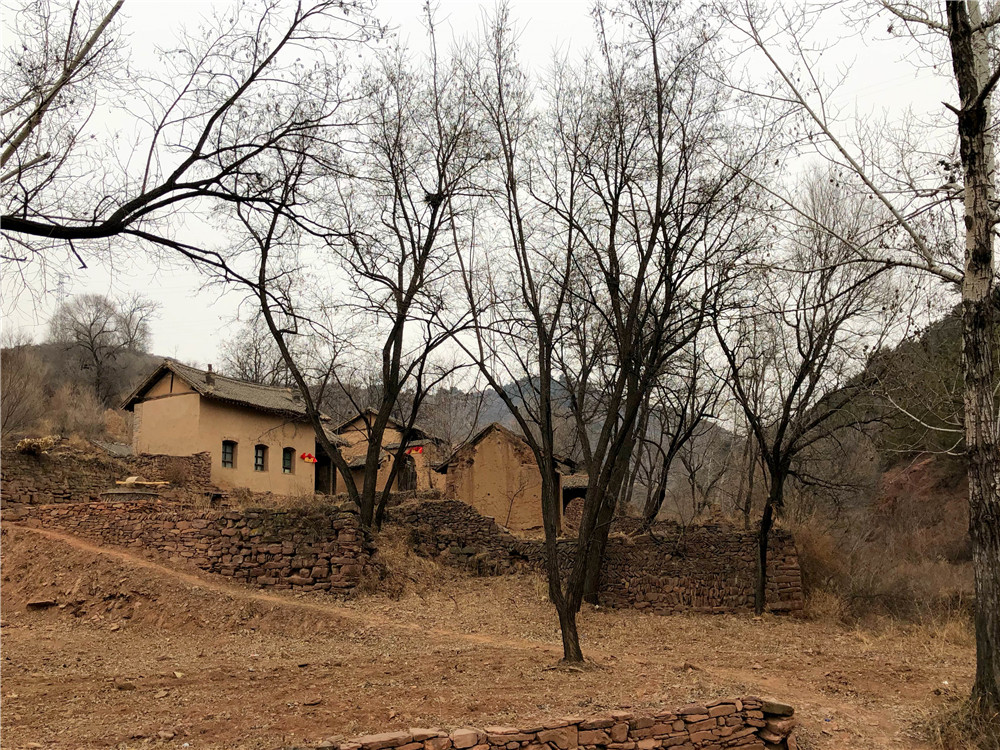 The site was an abandoned homestead in the village that is said to once be the location of the Firearms Repair Bureau of Taiyue Military Region during the Anti-Japanese War. Most of the original houses have collapsed, leaving only half of the earthen house and the foundation site. The existing courtyard gate was later rebuilt according to the local residential form. The dramatic theme of the Firearms Repair Bureau is also one of the reasons for choosing this site, which also provides a basis for the selection of subsequent design languages. 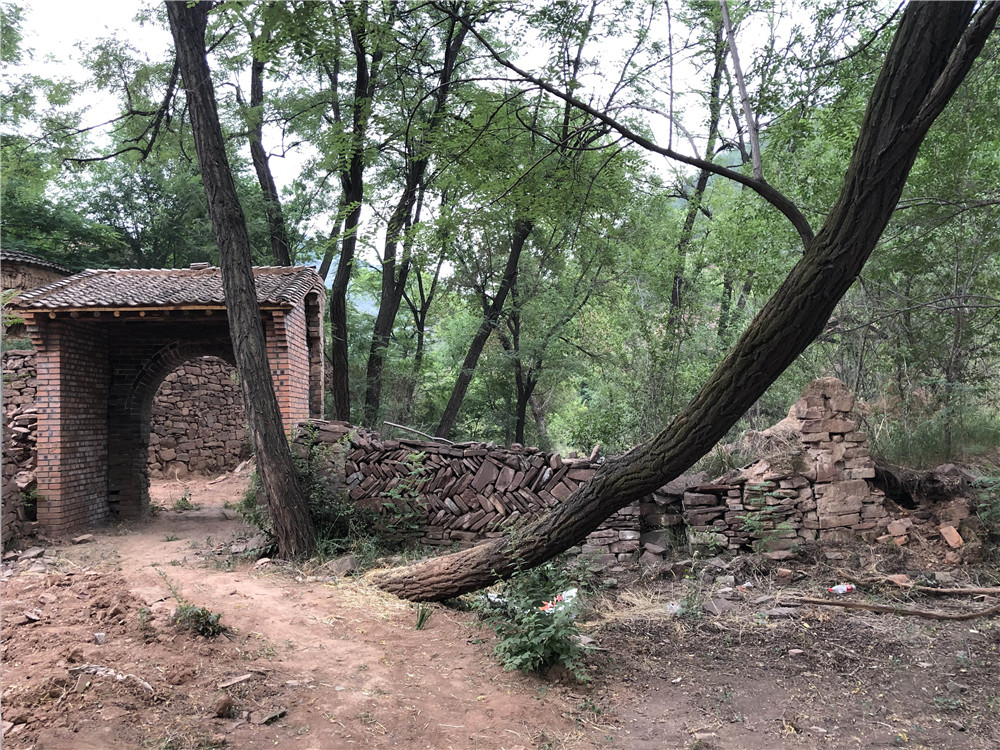 Spatial Arrangement： A Symbiosis with Trees and Old Earthen House

The most obvious and attractive elements in the site are the remaining half earthen house and uneven trees.

Half of the earthen house has collapsed, and the remaining half gives people a sense of time, yet without sadness. As the main buildings in the courtyard have collapsed, leaving only the base site, the trees in the site become another subject of vision and space. The species of trees here are not valuable, which are tall and thin, with black trunks, like a row of poles inserted in the field. They naturally become the foreground of viewing the venue from a distance. In a group of vertical “poles”, there is a disparate one – a tree with a serious inclination in the middle of the site. The angle between the trunk and the ground is almost 30 degrees, which gives people an unreal sense of “rocking” and increases the dramaticism of the venue. 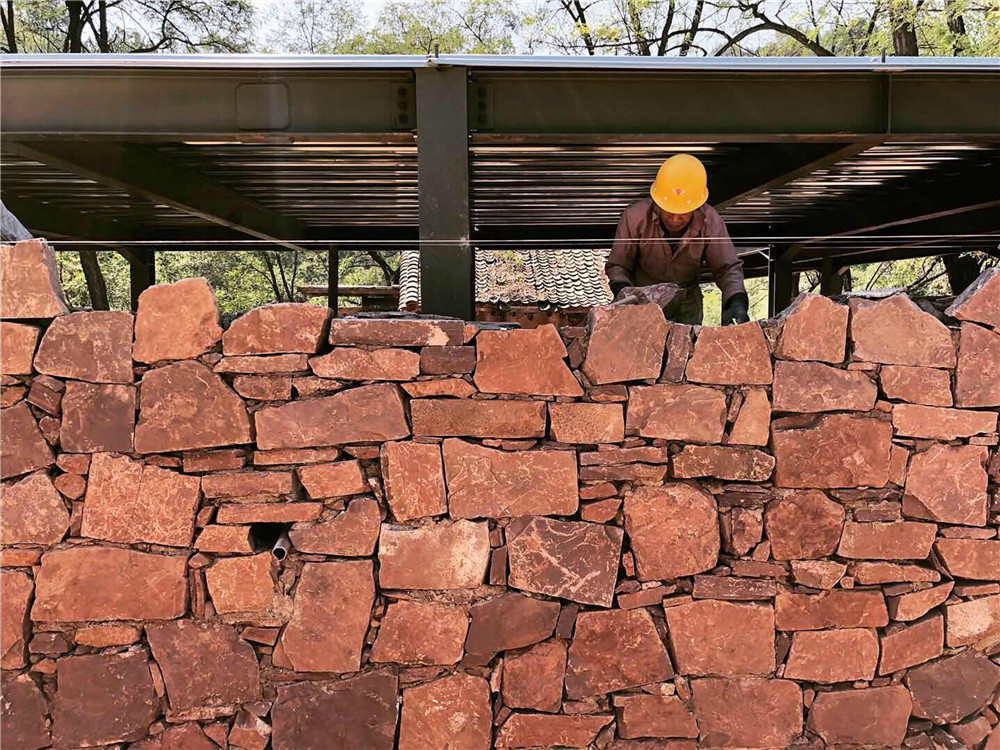 After observing the site, the architect decided to preserve the half earthen house together with the trees and build a new spatial relationship based on them. The new building gives way to the old house and trees in the shape of the letter L, of which the inner side is the half earthen house, which is half enclosed by the new building. On the outside of the long side of the L is a row of vertical trees, which form a silhouette in front of the building. The “rocking tree” is preserved and still tilts to the building. In the architect’s imagination, children can naughtily walk up the sloping tree trunk and then jump down from half height, as a part of their childhood.

After the completion of the construction, a symbiotic relationship has been formed between the old and the new buildings, as well as between the buildings and the trees. They crisscross with each other and reach a new balance. 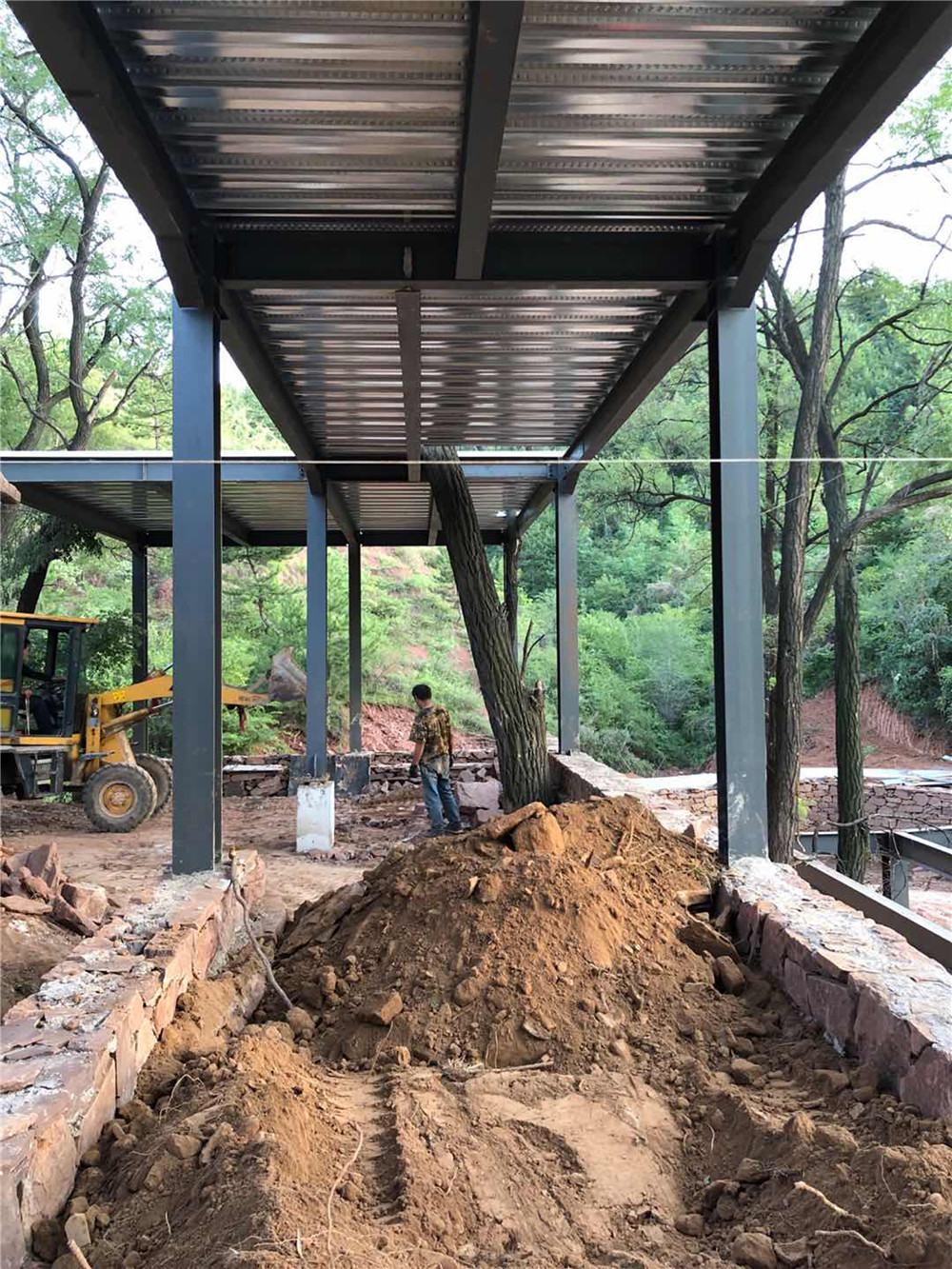 Buildings： A Coexistence of Provincialism with Fashion 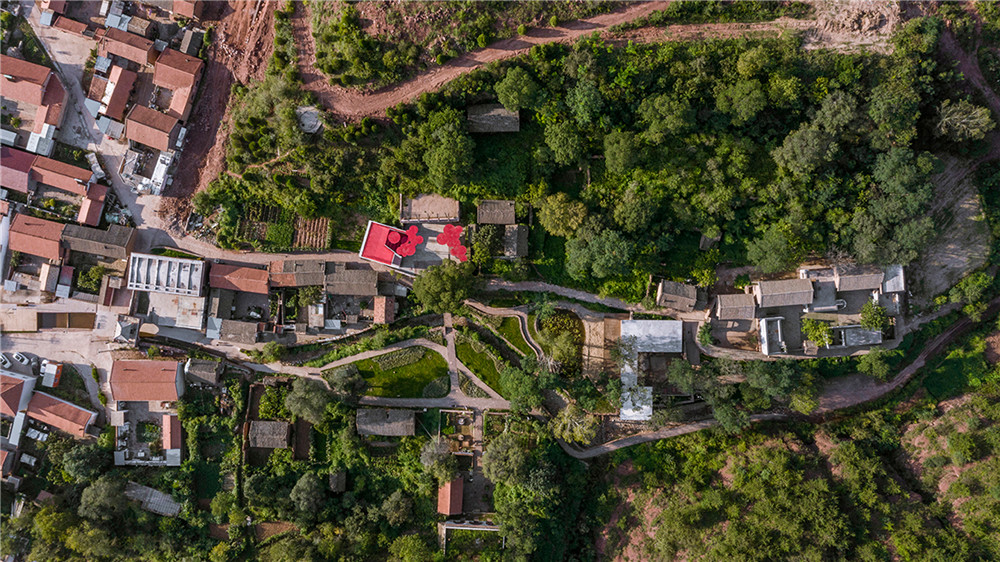 The opening and closing logic of building facade follows the logic of sight line and landscape. Parts of the exterior facade are open to the central landscape. The design of fullview glass windows introduces the outdoor scenery into the building. The interface between the building and the environment is softened by transparent materials, and the sight can penetrate indoors and outdoors. The wall facing the road is relatively closed, which is completed by local traditional stone-laying technology. The facade facing the inner courtyard is centered on the half earthen house, the part near which is fullview glass, while the facade away from which is mainly enclosed wall. 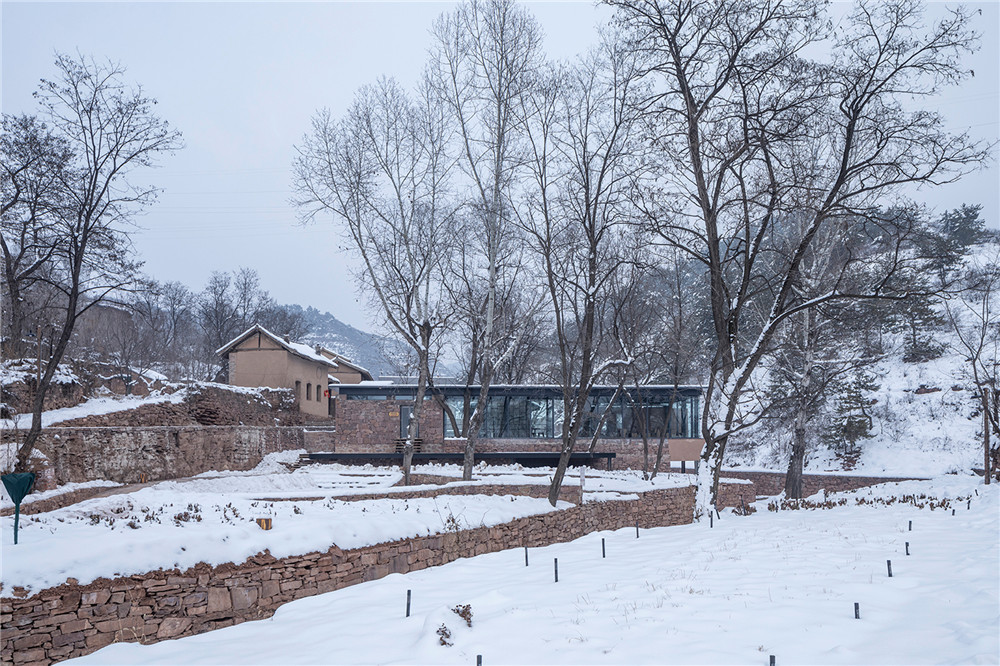 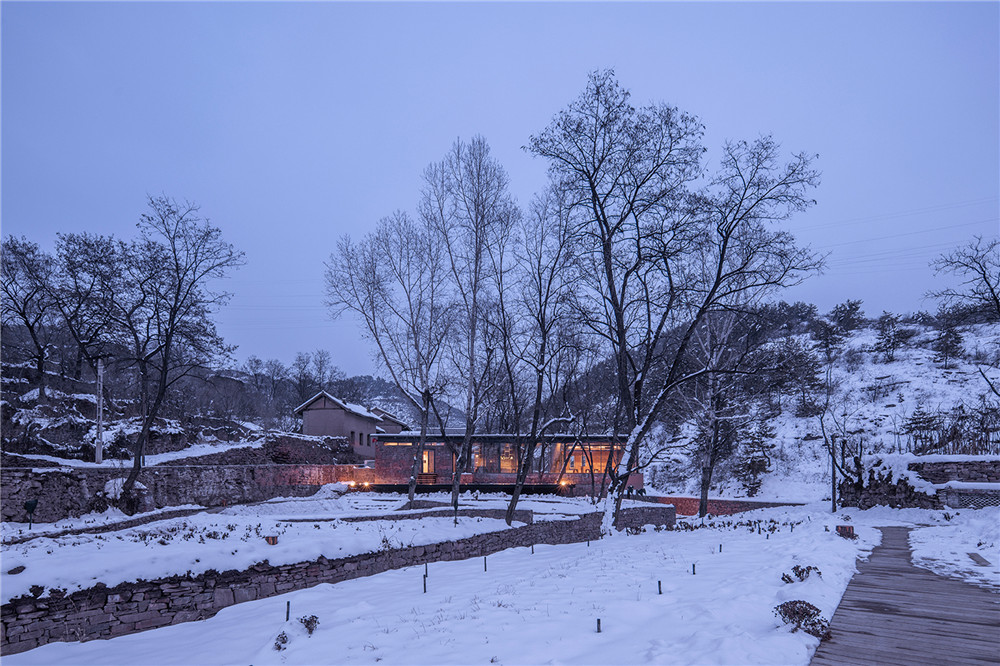 The main structure of the building is steel structure, and the facade materials are mainly glass and rubble. Steel structure not only ensures the speed of construction, but also avoids the impact of new buildings on trees. Rubble is a typical feature of the local traditional architecture, which is conducive to the establishment of a temporal and spatial context between the new building and the site. 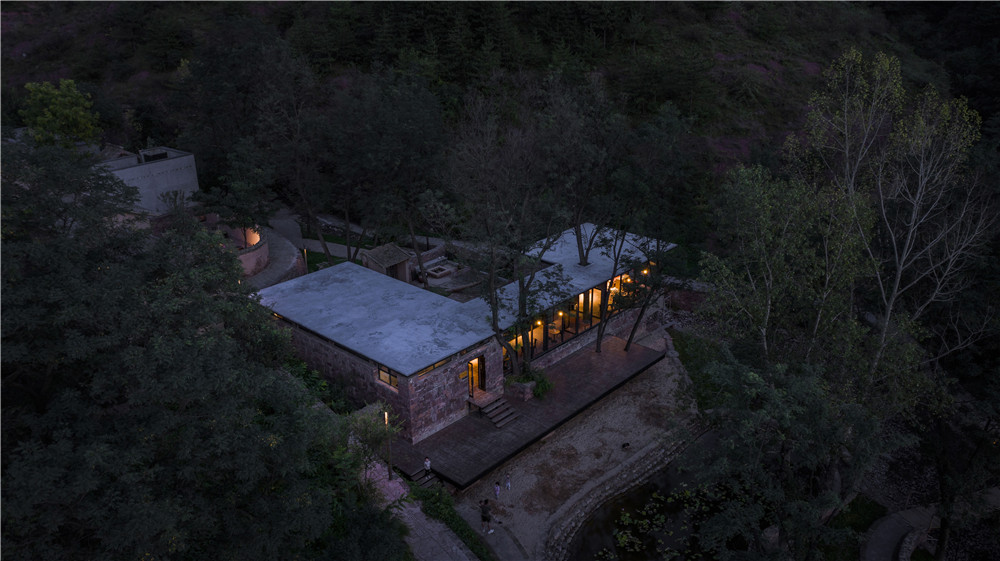 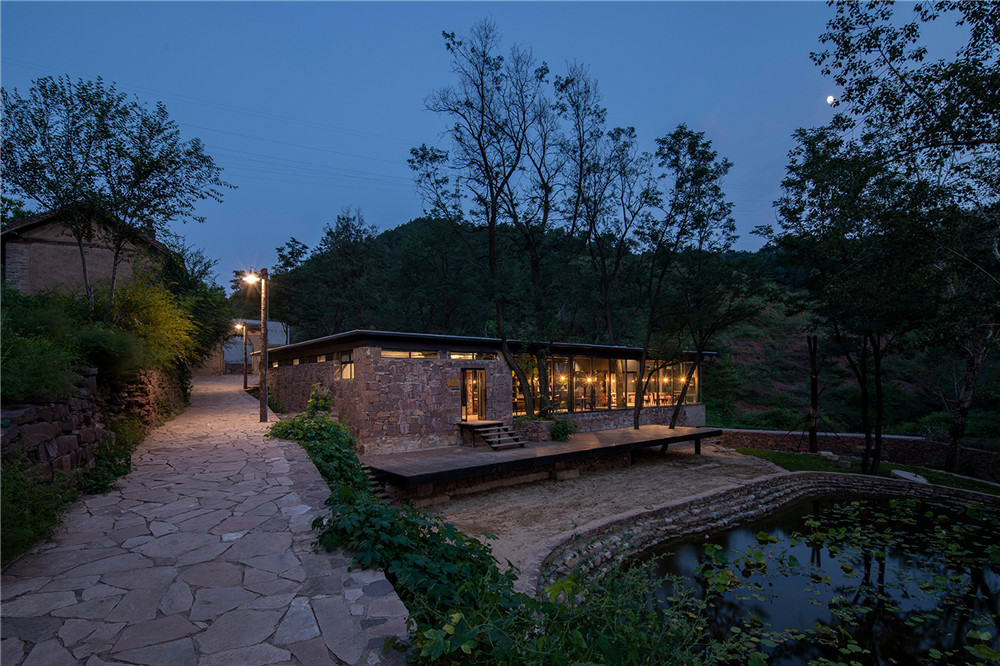 In terms of function, the new building is a cafe with water bar, which provides a main public leisure place for the guests of homestays in Hanhonggou. In order to protect the trees in the site, the interior of the building is divided into two areas. Between the two areas is a semi open gray space, and a tree goes out from the middle.

In addition to serving foreign guests, the new building also brings vitality to the village and adds a fashionable atmosphere to the old village. ▲咖啡厅为乡村提供了休闲的场所 Cafe provides a leisure place for the village Indoor： Tough but Not Cold

Because the predecessor of the building was the Firearms Repair Bureau during the Anti-Japanese War, military naturally became the theme of interior design. The interior is not complicated and does not pursue exquisite luxury. The floor and walls are mainly made of red brick, which takes advantage of the good scale of brick, semi manual texture and warm body feeling, neutralizing the cold of steel and glass. The olive green glazed tile is selected for the ground partially, which forms the contrast of color and texture with red brick and enlivens the atmosphere. The bar counter and fixed seats are plastered with cement. With industrial style furniture, ammunition box shaped benches, and exposed roof equipment pipelines, the space gives a strong and tough temperament. The choice of naked bubble lighting, warm yellow light, slightly dazzling glare, all imply the leisure identity of the space. 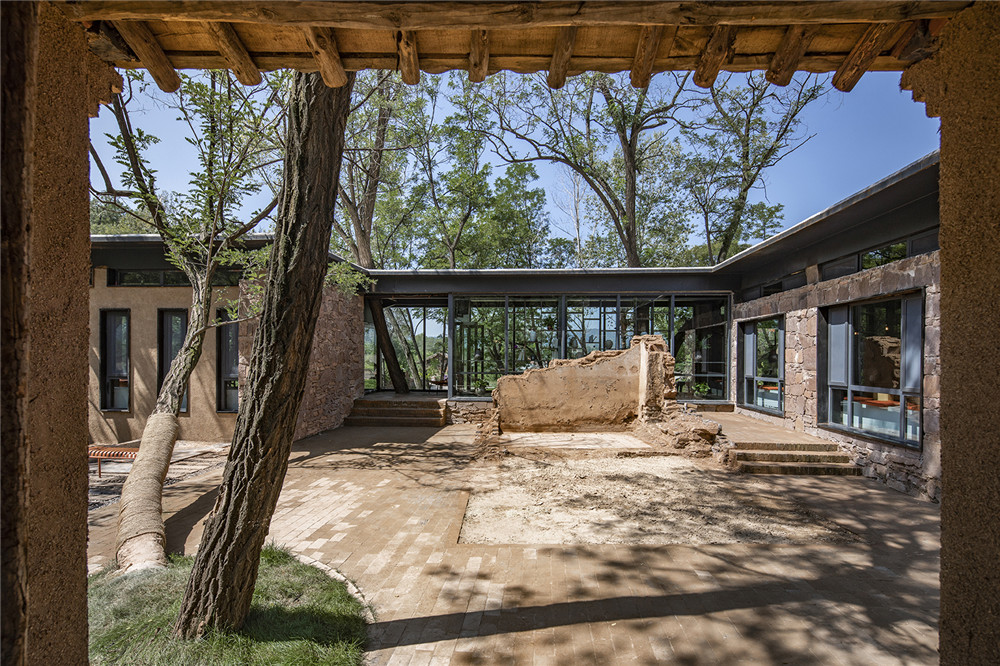 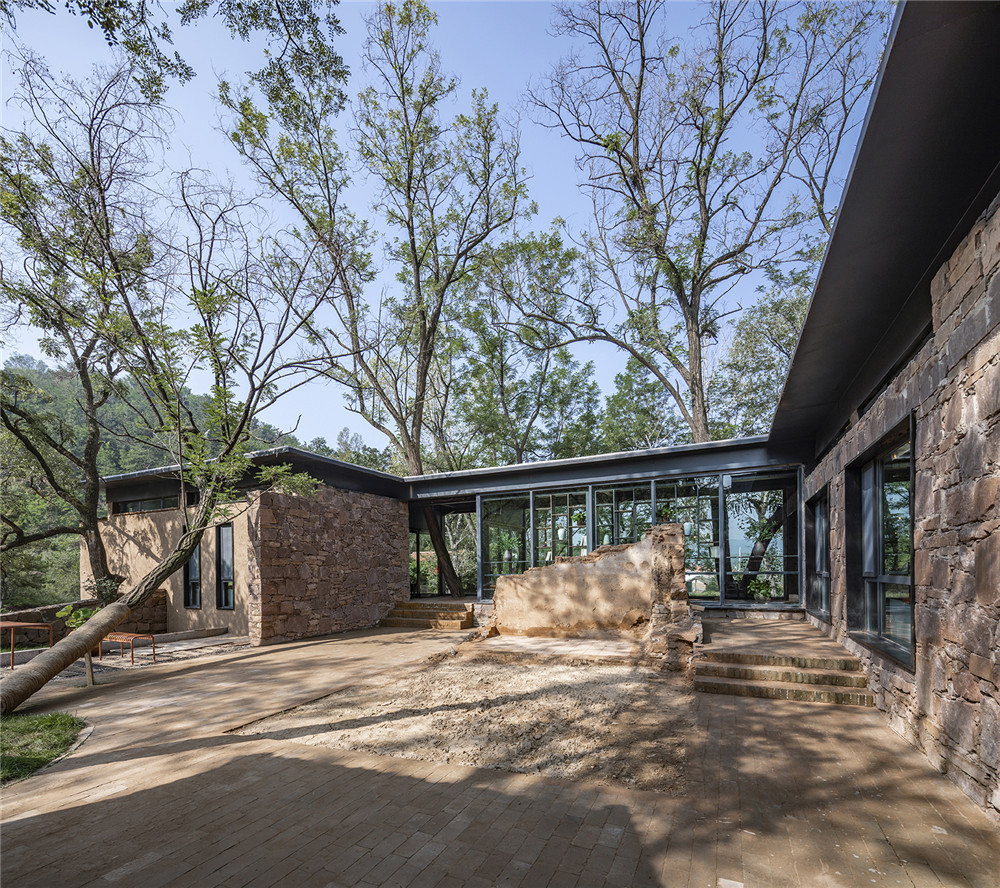 The external space of the building is composed of courtyard and outdoor platform area. ▲夜晚的咖啡厅及院落 Cafe and courtyard in the evening

The courtyard is small, and the new building is located in the northwest of the courtyard. The gray space at the entrance of the building provides the possibility of outdoor sitting for guests. The old earthen house and “rocking tree” are in the middle of the yard, which can be seen and played. There are barbecue pool and outdoor seats in the southeast corner of the courtyard, which can be used for many people to gather and barbecue outdoors. In nights, eating grilled skewers, drinking beer, and looking up at the stars, what an enjoyment! 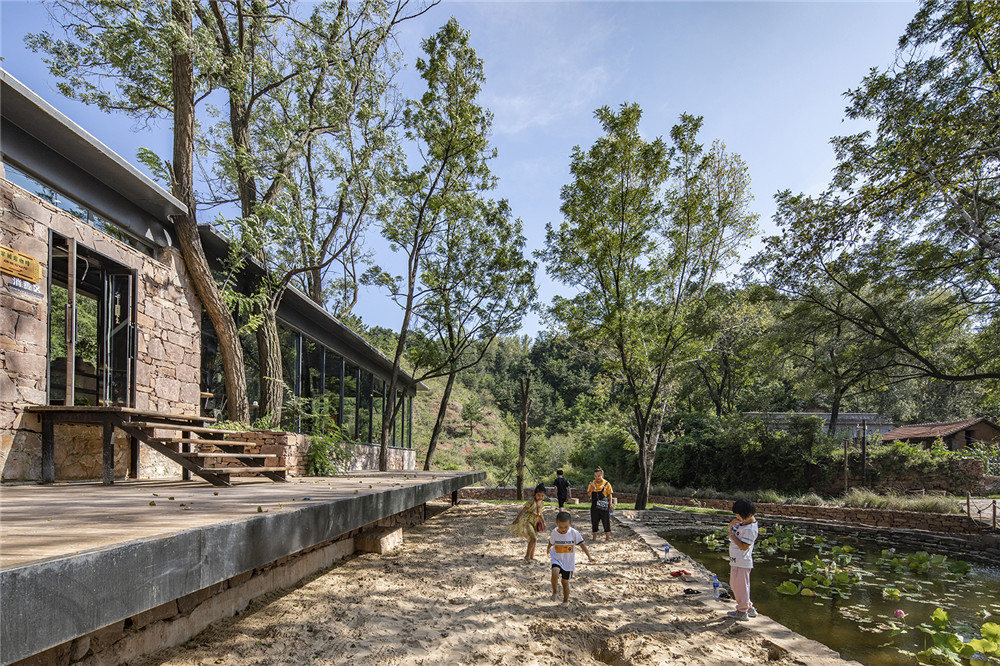 ▲咖啡厅西侧的水池和沙坑 Pool and sandpit on the west side of the cafe 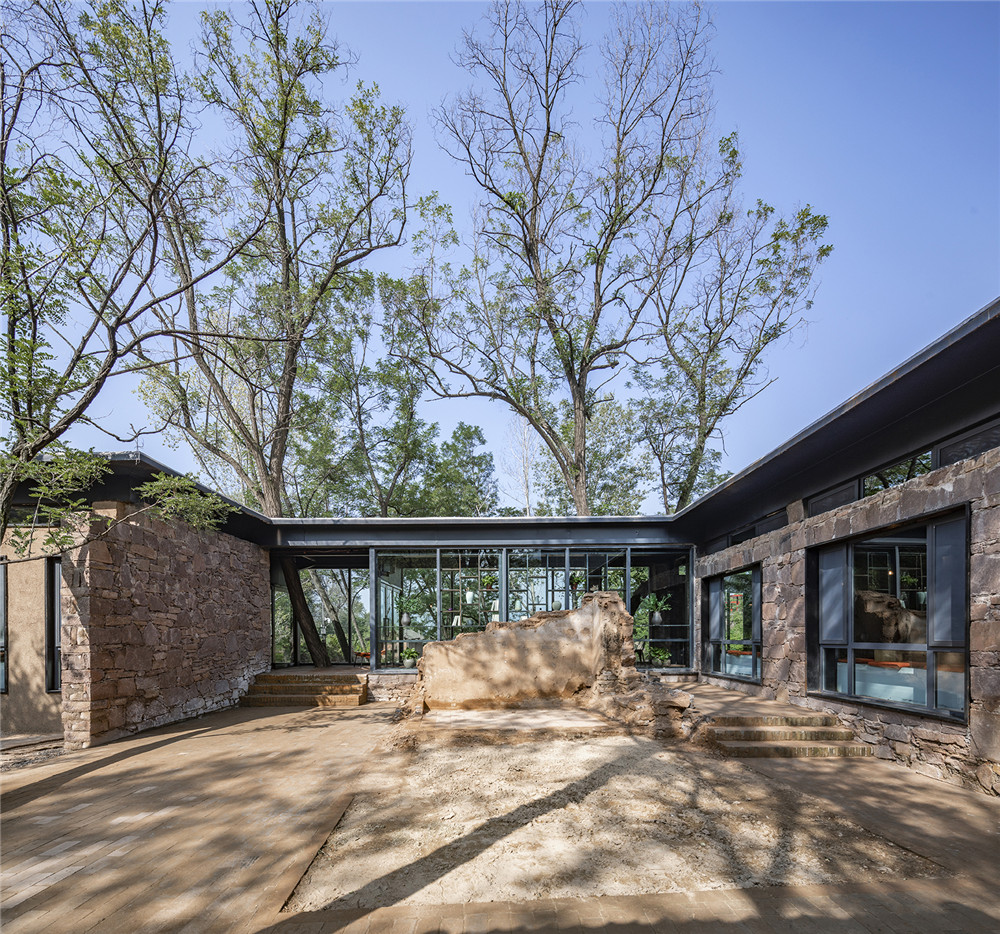 In the west of the new building near the pool area, outdoor wooden platforms and sand pit are designed. The wooden platform allows guests to take their seats outdoors, and the sand pit is a paradise for children. 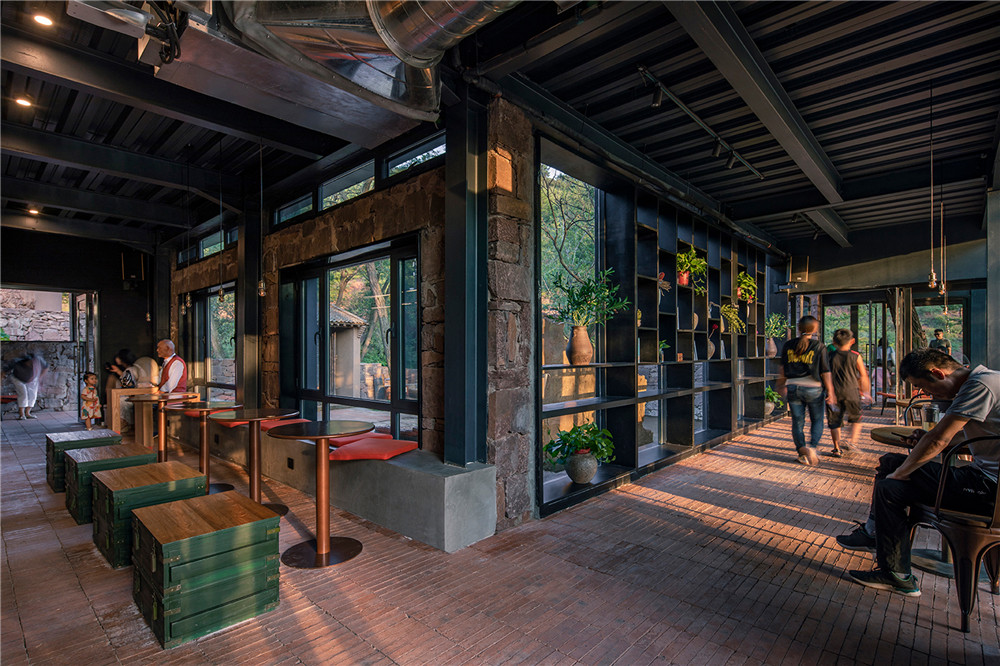 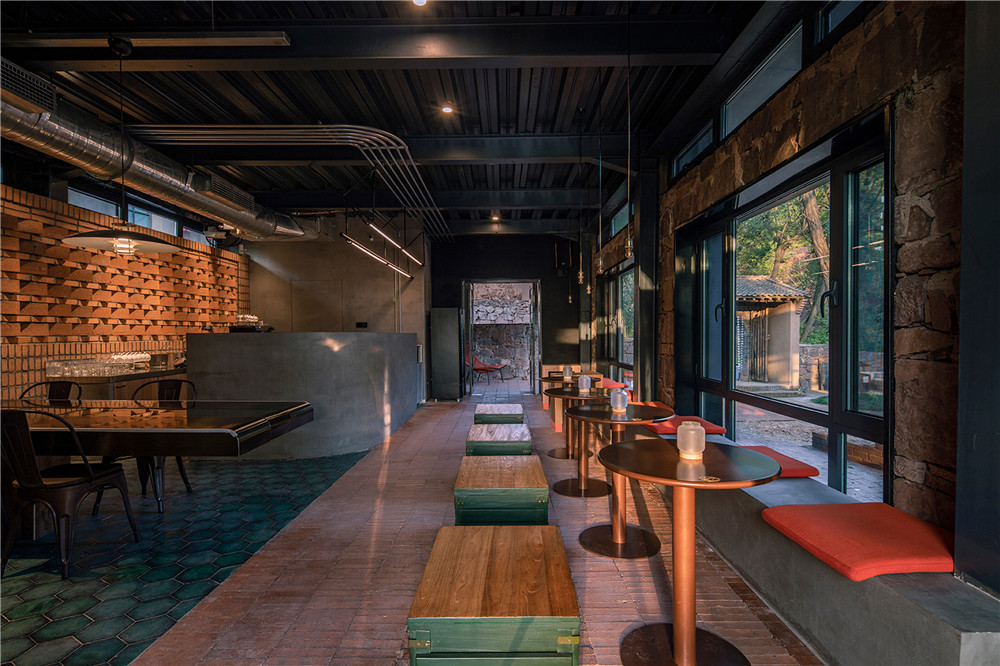 The coffee shop has been built in July 2020 and put into trial operation to receive customers. However, as the old saying goes, “The road to happiness is strewn with setbacks.” Qinyuan County encountered the rainy season that has not happened in decades. The rain for nearly two months has made many old earthen houses in the village begin to be damaged, and some houses even collapsed because of the roof leakage, incl. the old earthen house in the courtyard of the cafe. At the end of August, workers found that cracks began to appear in the corners of the old house and the walls began to tilt. Unfortunately, the cracks and inclinations of the walls did not stop in spite of all the repairs. Finally, in order to ensure safety, the roof and part of the walls had to be demolished. 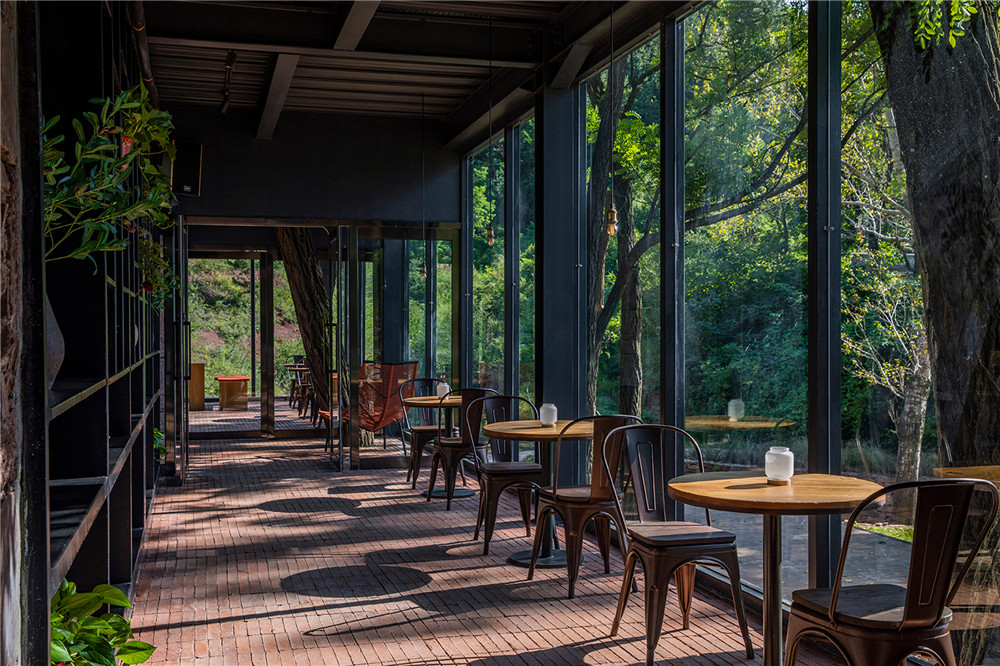 Yet the traces of the old earthen house has not been completely erased, as the lower part of the walls has been retained at the request of the architect. With the originally designed small bunker together, it forms a playground for children. The “lowered” walls accidentally expose the new building and make the interior space of the courtyard more comfortable. In the future, the architect will still protect and reuse the old earth walls, but the current state is indeed a kind of windfall. Sometimes, architecture is like this： Everything is possible. A blessing in disguise, as the Chinese say. 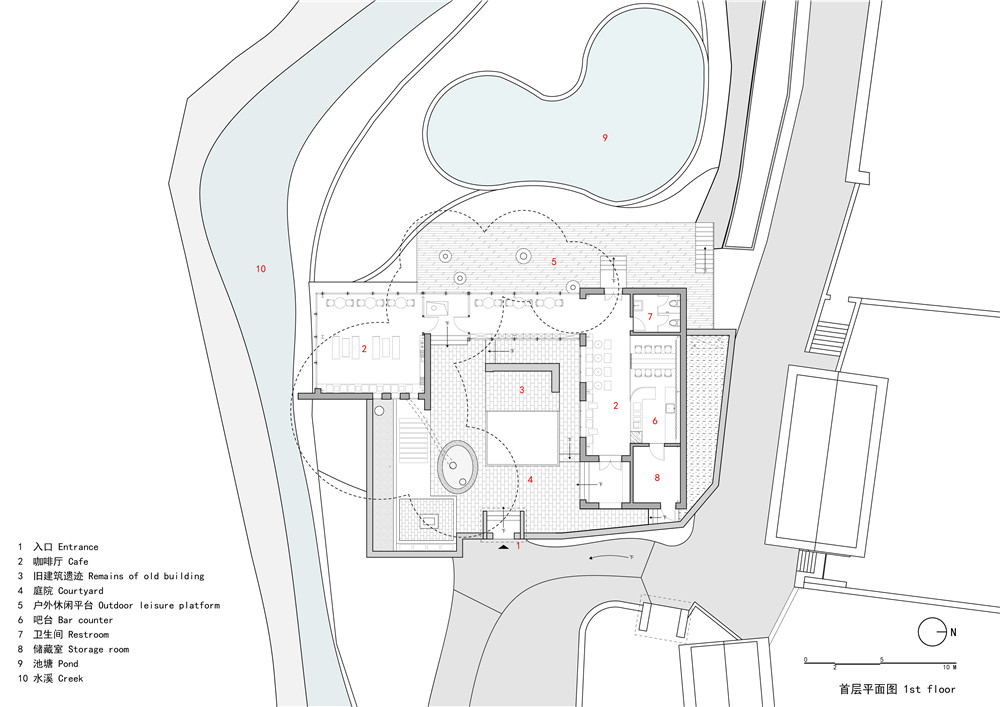 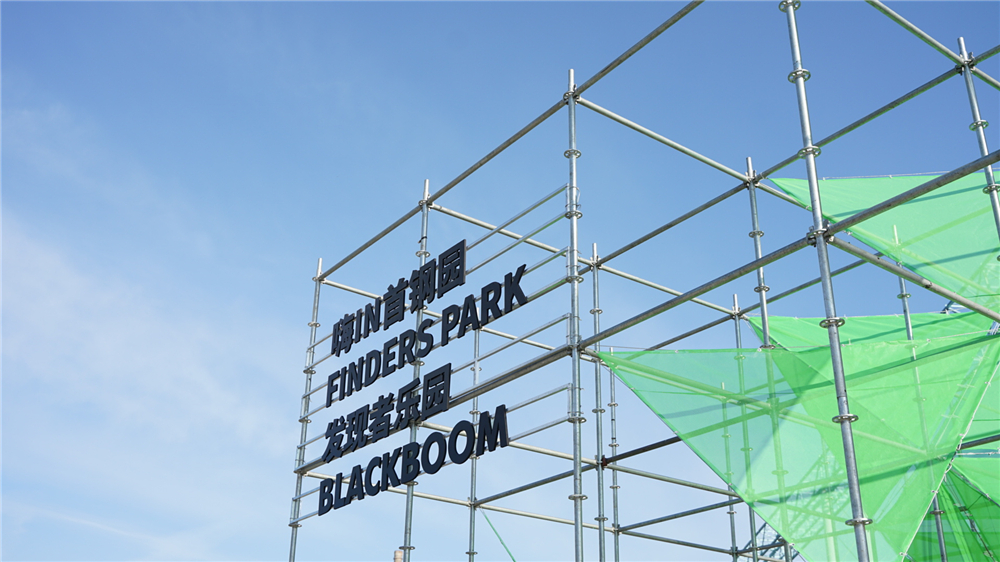